Hrayr Maroukhian was a prominent member and long-time leader of the Armenian Revolutionary Federation-Dashnaktsutyun (ARF-D), who passed away in 1998. During his chairmanship, the ARF-D rejoined the Socialist International. 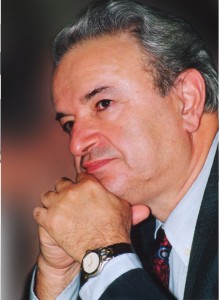 Hrayr Torkom Maroukhian was born on December 19, 1928 in Kermanshah, Iran. He studied and graduated from the mechanical engineering faculty at Iran’s State University and later established his own engineering firm.

From a young age, he became a member of the ARF youth organization in Tehran, Iran and later joined the party. He was one of the founders and, later, president of Tehran’s Ararat Sports and Cultural Union. His gift for organizational matters and his adherence to his ideological principles were evident from the beginning of his foray into Armenian national and social activities. These attributes contributed to Hrayr Maroukhian’s ascent to leadership roles in Armenian social and political life.

In 1963, as the representative of Northern Iran’s ARF-D Central Committee, Hrayr Maroukhian took part in the ARF-D’s 18th World Congress. That world congress had a very significant meaning in ARF-D history because it called for generation change. The generation of Tro, Navasartian and Vratsian were replaced by younger members born and raised in the Diaspora. As one of the most prominent faces of that generation, Hrayr Maroukhian was elected to the Bureau of the ARF-D. In September 1964, he moved with his family to Beirut, Lebanon where the office of the Bureau was located.

He was re-elected to the ARF-D Bureau in 1967 and in 1972 became its chairman following the death of A. Kabakian. At the 20th World Congress of the ARF-D in 1988, which re-evaluated the party’s policies of the past quarter century and set a new agenda, Maroukhian was elected as the chairman of the Bureau. He would continually be re-elected to that position until one fateful day on July 17, 1994, when he suffered a debilitating brain aneurysm and was bed ridden until his passing.

At the 24th World Congress of the party in 1988, a new political and organizational phase was embarked upon for the ARF-D; along with the Karabakh Movement, the axis of the party’s activity centered on the Debi Yerkir (Toward the Homeland) motto. Personally leading the organization’s re-establishment in the homeland, Hrayr Maroukhian, as the chairman of the ARF-D Bureau, became an active presence on Armenia’s political stage, in the struggle for freedom in Karabakh and in Armenia’s national renaissance.

To strike a blow at the ARF-D’s growing popularity, the first president of the Republic of Armenia Levon Ter-Petrossian issued a decree on June 29, 1992, to expel Hrayr Maroukhian from Armenia.

Then, for more than two years until his accident, Hrayr Maroukhian became the symbol of the political struggle against the ruling regime’s dictatorial measures.

Hrayr Maroukhian passed away on December 21, 1998. It had been Maroukhian’s dream to live in Armenia and to devote his life to the mission of further strengthening the newly independent Armenian state. But fate dictated that he would return to the homeland only in death. The new administration in Yerevan reversed the June 29, 1992, decree and Maroukhian’s remains were flown to Armenia for a funeral on December 26, 1998 attended by President Robert Kocharyan, his key ministers and senior party officials from around the world. The procession, accompanied by army guards, began from the Komitas Chamber Music Hall in central Yerevan to end at the City Pantheon, where prominent public figures are laid to rest. On Sunday, December 27, 1998, a requiem was held at the Etchmiadzin Cathedral, as well as in churches throughout the world.

Hrayr Maroukhian’s dedication and committment to the Armenian people, to the empowerment of the newly independent Republic of Armenia and for the right to self-determination of the people of Karabakh, will always be revered and remembered, not only by the ARF-D but by the Armenian nation.