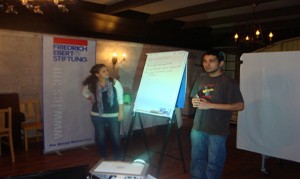 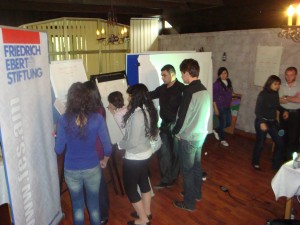 YEREVAN — On May 20-22, 2011 the Hrayr Maroukhian Foundation with the support of the Friedrich Ebert Foundation organized a three-day seminar in the Armenian resort town of Dilijan for young Armenian political leaders. Twenty members of the Armenian Youth Federation and the Nikol Aghbalyan Student’s Union participated in the training conducted by Bjӧrn Kulp of the Training Academy of Germany.

The training encompassed three main components: Strategic Planning, Future Search and World Café. Utilizing interactive methods and techniques, Bjӧrn Kulp engaged the young leaders and encouraged them to explore a whole realm of possibilities with regard to setting a clearly defined vision for their respective organizations.

The first 1.5 days were spent learning about Strategic Planning as a disciplined effort to produce fundamental decisions and actions that shape and guide what an organization is, what it does and why it does it with a focus on the future. Setting strategy is about an organization’s objectives, setting goals and devising an approach to achieve them. Bjӧrn Kulp outlined the five steps of strategic planning: a) developing a work plan, b) articulating mission and vision, c) data generation/analysis (SWOT technique), d) strategic directions, and e) completing the written plan – strategic plan. 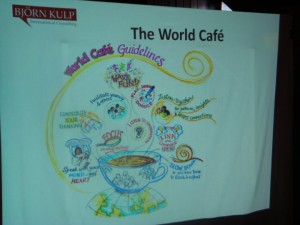 World Café, the final component of the training, is an innovative yet simple methodology for hosting conversations about questions that matter. The idea was developed following the realization that most creative conversations are held during coffee breaks rather than in conferences. Therefore, in a coffee shop setting participants sit around tables and discuss a predetermined question/issue. This process allows conversations to link and build on each other as people then move between tables, cross-pollinate ideas and discover new insights into those questions or issues that are most important in their life, work or community. As a process the World Café can evoke and make visible the collective intelligence of any group thus increasing people’s capacity for effective action in pursuit of common aims.

After three intensive days of training, which provided new ideas, methods and techniques on how to set goals and achieve them, the participants traveled back to Yerevan with a new sense of purpose and a clearer vision of how to effectively work within their organizations.

Socialist International Vice President and Director of the Hrayr Maroukhian Foundation Maria Titizian took part in a National Conference on Women on May 18-19 organized by the National Democratic Institute (NDI) and USAID, with support from the British Embassy and the United Nations Development Program (UNDP). The conference, “Supporting Women’s Political Participation in Armenia: A Nationwide Women’s Conference and Women’s Platform” aimed to bring greater attention to women’s issues and increase women’s political representation and participation in Armenia.

Over 300 women leaders from civil society, government, academia, and political parties took part in the conference.

During the conference, the women participants broke into smaller, cross-sector working groups to formulate policy solutions regarding issues of concern to Armenian women. Panel discussions addressed topics such as coalition building, working within parties and across sectors to support gender equality, domestic violence, health and encouraging male political leaders and the public at large to support greater political rights for women.

Academics, politicians and leading activists from Armenia and the Diaspora gathered at the University of California on Saturday, December 4, 2010, to explore the 120 year history of the Armenian Revolutionary Federation-Dashnaktsutyun, one of the oldest and most influential political organizations in Armenian history.

Among the speakers was Maria Titizian, director of the Hrayr Maroukiian Foundation in Armenia, who explored the role of women in the ARF throughout its 120-year history in a presentation titled, “Women in the ARF: Past, Present & Future.”

Titizian, who is a Vice President of the Socialist International and serves as the ARF’s representative to the Socialist International Women, focused her presentation on three distinct time periods: the National Liberation Movement of the 1880s-1921; the exile from Soviet Armenia and the formation of Diasporan communities from 1921-1991; and the re-emergence of the party in Armenia after independence in 1991. Titizian also paid particular attention to the role played by ARF women in the creation of the ARF, the government of the First Armenian Republic, and the Karabakh liberation struggle.

Her presentation revealed a general absence of women in key decision-making bodies of the ARF, which she explained was a reflection of an Armenian reality in which men dominate in social and political life. Titizian underscored that gender inequality has “served as an impediment to democratization and development in the Republic of Armenia and to the deficiency of women’s perspectives, views, and experiences in the Diaspora.”

In concluding her presentation, she charted a course forward for the ARF, urging the party to lead the way to change by ensuring “the creation of a level playing field that will remove the subtle barriers to the advancement of women within its party structures.”

Ms. Titizian was also a feature speaker at the 3rd annual Armenians and Progressive Politics forum, at the Armenian Center in Hollywood on December 8, 2010, in a discussion on women’s issues in Armenia.